I finally completed and delivered the 70th birthday present to Davids Mother (shown holding the picture). While I cursed Fred a few times (every time I had to change the thread for less than a minute of sewing – one of the pictures had 46 colour changes) while stitching, the end results were well worth it, and I am very pleased that I did not edit some of the shading out. I also mentally apologised to Fred after completing the three inidians!!! Everyone felt that Fred did a marvellous job, he is really talented. Some of the shading was so subtle, but if it wasnt there, it would not look so good (David has just made the comment that the designs are like a really good sausage – the end result is marvellous but you dont want to know what went into it). Davids mum would be interested to know if  the Navajo Medicine Man is a specific individual like the other two, or is a generic picture, and if it is a named individual please could she have the name, she wants to put the names on the back of the picture.

David is now considering that he has lost his orchid bag, but I have assured him that as soon as I get a cat bag done, he will get the orchid bag back. Davids mother wants a green orchid bag for christmas, so I will be making yet another one (my third). Due to two floods in the house, I have not managed to get Davids orchid plaque done (and the show he was getting me to do it for got cancelled)  but I am hoping that now I have disinterred my sewing machine and embroidery unit (at the back of the sewing room, and there was half the affected bedrooms furniture in front of it – the rest of the furniture was in the lounge) I will be able to get it stitched. As soon as I stitch it I promise I will send a photo. 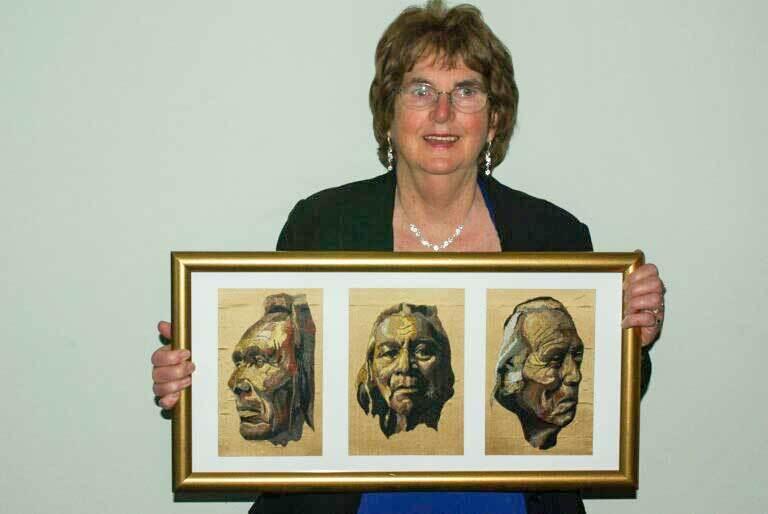